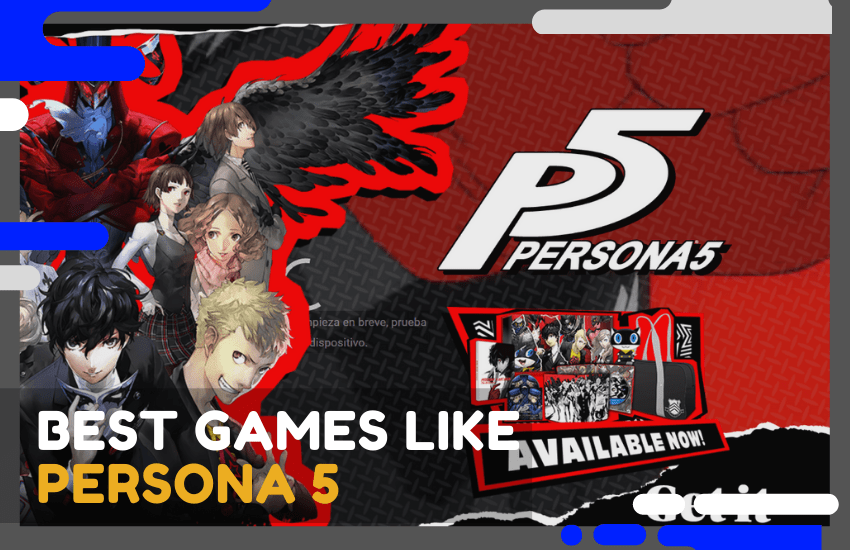 8 Games Like Persona  If You’re Looking for Something Similar Digimon in general has a a bit in common with Persona, and Cyber Sleuth is clearly inspired by the popular JRPG series. With a bright and vibrant art style, you assume the role of an amateur hacker who discovers the ability to battle and capture Digimon.

Throughout the game you have to hop between the real world and the Digital world, exploring dungeons in a similar manner to something like Persona 4. Additionally, there’s a deep and complex system for capturing and evolving Digimon, letting you craft your team from a selection of monsters from the beginning of the series. It’s through this blend of real world exploration and sidequesting, and Digital world battling and dungeon crawling that Cyber Sleuth evokes Persona. However, it doesn’t contain the same level of character development and time management that Atlus’ series does. Still, Digimon Story: Cyber Sleuth is a great game to pick up if you want another expansive and colorful world to explore for hours on end. Persona, of course, has a lot in common with its mothership series Shin Megami Tensei, and the latest entry SMT IV: Apocalypse is another stellar title. Picking up right at the end of the original SMT IV, Apocalypse follows a brand new character in the post-apocalyptic wasteland of Tokyo.

The main SMT series has much more of an emphasis on gameplay and demon capturing, whereas Persona is more focused on story. While this is true with Apocalypse, the game does feature a surprisingly engaging story with a memorable cast of main characters. If you’ve played Persona 5 you’ll feel right at home with all of the systems in Apocalypse, like exploiting enemies’ weaknesses and bargaining with demons to get them to join your team. There’s plenty to enjoy with the title as well, as you’ll easily have 60-100 hours of gameplay on just your first run through, and luckily scaling difficulty levels make it one of the most accessible titles of the SMT series. If you need a little bit more to scratch that Persona itch, this may just be the best next step.

The Legend of Heroes: Trails of Cold Steel – PS3, Vita Trails of Cold Steel feels like a fusion between The Legend of Heroes series and Persona, retaining many of the thematic and combat elements of the former along with some of the social aspects of the latter. The title casts you as Rean Swcharzer, a new student at the Thors military academy. Rean ends up being selected for a special class, trained to handle important missions for the Erebonian Empire. Your fellow classmates are the various party members for the game, and they each play an important role in the story. To go along with this, you build a relationship with each by spending your free time with them while at the school. Doing this boosts that respective character’s link level, unlocking new abilities in combat, similarly to how the Persona social link system works.

On top of this the game advances with a calendar system, having you live out each day through classes, hanging out with classmates, or doing special operations. The system isn’t as stringent as Persona, but it does give the game a sense of time passing all the same. Combat remains the tried and true formula of The Legend of Heroes series, with a big emphasis on positioning and special attacks. Any Persona fan will find a lot to love in Trails of Cold Steel, with its engaging social system, mature storyline, and fleshed out characters. Conception II is certainly a bit of an odd game, although it does have quite a few similarities with the Persona series. You take control of Wake Archus, a teenager who discovers he bears the mark of the Star God on his hand. You attend a high school that doubles as a training ground for demon hunters, and become a celebrity known as “God’s Gift,” due to the high amount of ether in your body. Now here’s the catch, through an exercise known as “classmating” Wake can create Star Children with his classmates, all of which can join the party. There’s plenty of relationship building and character development to see while at the school, in addition to shopping and equipping your party.

When not spending time in your school life, Conception II is filled with lengthy, complex dungeons to explore. Your party is a combination of classmates and Star Children, with each one specializing in different skills and attacks. These dungeons can be fairly generic at times, but there’s still a certain level of challenge to combat. Conception II has quite a few anime tropes and fan service, but there’s still a lengthy Persona-esque JRPG underneath. The Harvest Moon games are almost entirely simulation, but the Rune Factory sub-series helps add a little bit of fantasy flair into the mix. If you enjoy the time management and social sim aspects of the Persona series, Rune Factory might be a good fit. You play as Raguna, a young amnesiac boy who wanders into the town of Kardia and collapses. He’s saved by a girl named Mist, who eventually offers him a house on her plot of land with farmland. You have to spend your time caring for your farm, making crops, fishing, interacting with the townsfolk, and exploring the nearby cave system. Unlike other Harvest Moon games, Rune Factory has you battling monsters in the caves with a Zelda-like combat system. As you beat them you can make friends with monsters, who will offer you valuable goods and services in turn.

The storyline unfolds by clearing different sections of the cave and beating the boss, which will uncover more of Raguna’s memories. There’s plenty of choice as to how you spend each day in the game, however, and you can eventually marry one of the women from Kardia. There are four handheld Rune Factory games, and two more on consoles as well, if you want even more to play. There’s probably no other game around that matches Persona quite like Tokyo Mirage Sessions does. After all, the project is the long-awaited crossover between the Fire Emblem and Shin Megami Tensei series. In truth, however, the title shares a lot in common with Persona in terms of story, characters, and even gameplay. Tokyo Mirage Sessions takes place in modern day Tokyo, and focuses on a group of teenagers trying to become pop idols. The group finds out about evil beings known as Mirages that steal an energy known as Performa from humans, that saps them of the will to live.

Your group befriends a group of friendly Mirages who also happen to be characters from the Fire Emblem series. These Mirages function almost exactly like Persona, giving each character specific elemental and physical abilities. Battles also focus on exploiting enemies weaknesses, and opening them up to powerful cooperative session attacks from your characters. Also matching the style of Persona, Tokyo Mirage Sessions puts a big emphasis on the interpersonal relationships of your parties, and building their bonds. The colorful, pop-infused aesthetic also gives the game an entirely unique feel of its own. It’s one title that’s a no-brainer for any fan of Shin Megami Tensei or Persona. Xenoblade Chronicles may not have many similarities to Persona on its face, but there are a few things the two titles share. First and foremost, is how the story focuses on the growing relationships of its main cast. Xenoblade tells an epic, sweeping tale about humanity’s survival against an antagonist machine race known as the Mechon. You play as Shulk, a young mechanic that inherits the power of a mysterious blade known as the Monado, which can help him see the future. Combat plays out with an almost MMO-like system that makes you stay active, prompting different moves and special abilities as battle flows.

Xenoblade features a system based around building your parties’ bonds, both in battle and out. Taking certain actions in battle or making certain choices in conversations will boost Shulk’s affinity with another party member. Various points around the world marked with a handshake symbol, will allow you to view a scene relating to a particular character and their history or relationship with Shulk. You have to have a certain amount of affinity with each character to view each scene, creating a lot of optional side content to explore. Xenoblade Chronicles is truly one of the most memorable JRPGs of the last decade with fast and exciting combat, realistic characters, and an enthralling main narrative, and the relationship system alone is enough to attract any Persona fan. read this Persona 5 For PC Final Fantasy Type-0 is yet another of the few RPGs that share a common thread with the Persona series, especially in terms of school life and time management. Type-0 focuses on the Agito Cadets, an elite faction of military students in the Dominion of Rubrum. When the country is invaded by the Milates Empire, the cadets are called into action to help save the Dominion. You play as all twelve of the Agito Cadets, building your three-persona party however you wish. The title has combat somewhat similar to Final Fantasy VII: Crisis Core in real-time, with a heavy focus on quick action.

Type-0 is split between venturing out into the world of Orience on missions, and spending time at Akademia, the elite military school of Rubrum. Between missions, you have a set amount of free time, and each action you undertake subtracts some of that time. You can talk to your classmates to learn more about them, head out onto the world map to do sidequests, and boost your skills with classes. Type-0 may not have the everyday life simulation of the Persona series, but the school setting and time management definitely give it a similar vibe, along with everything you’d expect out of a Final Fantasy title.

Author’s Opinion regarding the Games Like Persona For PC

The Games Like Persona For PC has very strong features, while considering the security purpose, priority is very high. No VPN or RDP are required for the said purpose. In some cases, emulator also working fine and middleware software also have the important role for smooth functioning. Therefore, author recommended the Games Like Persona For PC for your personal use and has no issue regarding the installation on PC (Windows and Mac). I hope you also use it without any trouble, if you have any issue, please mentioned in the email, we will provide you answer with proper solutions. Please like and share with other, we did lot of efforts during the collections of the software for your download.