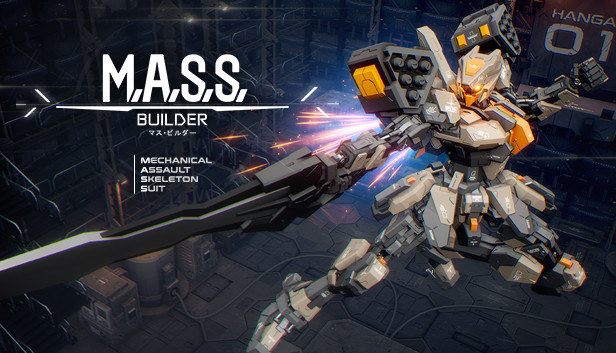 Robot games have a robust history rich in a variety of genres, ensuring that there’s an experience for every kind of mech fan. Fancy yourself a gearhead with a penchant for the micromanagement of mech parts and deliberate, laboured robo combat? How do you feel about fast-paced, anime-inspired Voltron-style action? Good news: there’s a game for you. 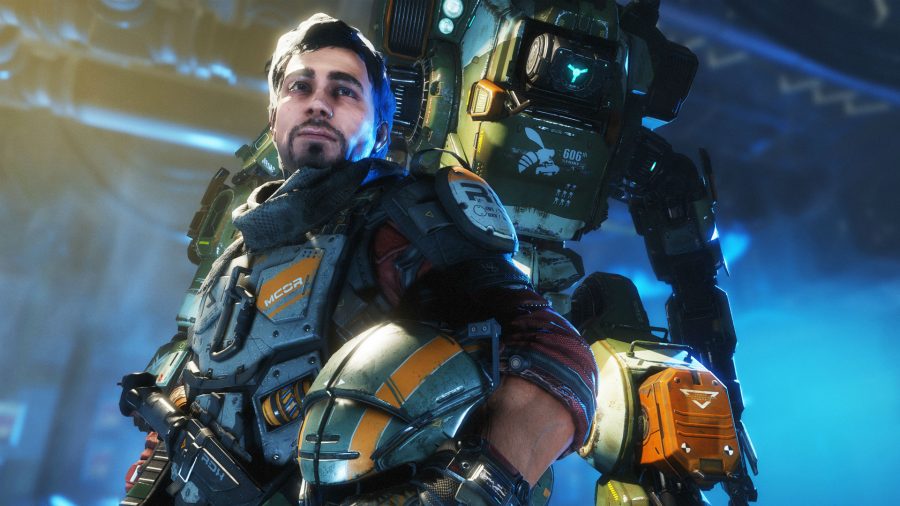 The bad news is that there might actually be too much choice. But never fear, because we’ve compiled this list of the nine best robot games available to play on PC, and have taken special care to represent as many different genres as possible. If you’re looking to dive into the wide world of robot games then this is a great place to start.

The best robot games on PC are: 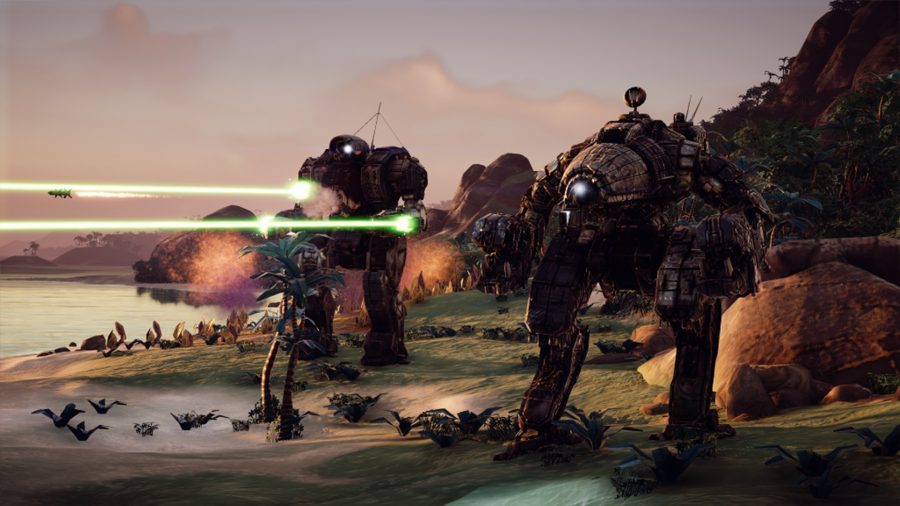 Released in 2017, BattleTech is a turn-based tactical war game that takes place in a distant galaxy in the midst of political upheaval. The noble class employs companies of mech-piloting mercenaries known as MechWarriors to wage war in an effort to wrest power from one another. As the leader of one of these companies, it falls to you to command a squad, or rather a ‘lance’ of mechs, in a series of intense tactical battles.

This explosive robot game offers a great deal of customisation options for your lance, from different models of chassis, to armour and weaponry. A well-rounded lance will have mechs suitable for all kinds of combat and terrain. By giving you this level of control over your mechs, developer Harebrained Schemes ensures that commanders experience a strong sense of personalisation and ownership over their lance. 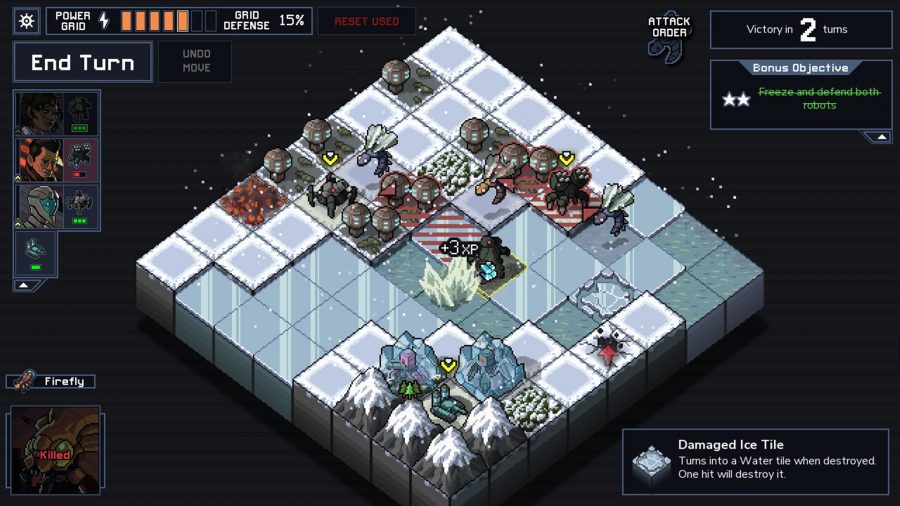 Another tactical, turn-based robot game from 2017, Into the Breach manages to represent the full scale of robot-on-monstrous-insect conflict in a small and time-efficient package. The game borrows elements from the roguelike genre and makes each attempt to beat the story its own disparate run. You can earn mech upgrades between battles, and also get to choose one pilot to keep with you between runs, which adds a bit of permanence to the experience.

The battles in this tank game take place on a small 8×8 grid and play out more like a puzzle than a tactics game. Each mech has different attacks that can move enemies around the map in specific ways, so planning your sequence of moves is almost more important than damaging the enemies outright. The presence of civilian buildings that must be protected complicates matters, making Into the Breach a tense and satisfying brain burner of an indie game. 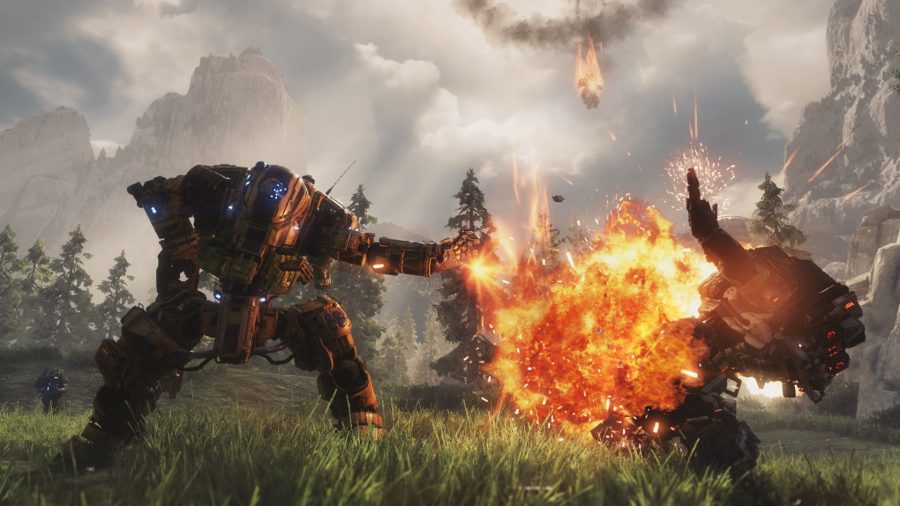 Developed by the team of Call of Duty veterans at Respawn Entertainment, the Titanfall games fuse swift, arcadey shooter action with heavy-fisted robot game combat. In what is perhaps one of the biggest surprises in recent years, Titanfall 2’s stellar single-player campaign tells the far-future story of a soldier and his mech that’s equal parts The Iron Giant and Singularity. Explosive set-pieces, thrilling platforming sections, and a touching finale all combine into one of the best mech-themed stories of all time. For real, this game has no business being as good as it is.

The smooth controls and satisfying gunplay translate perfectly to multiplayer mode, as well. With mechs and pilots duking it out all across the map, each match feels epic. There were rumours of Titanfall 3 swirling for a while, but it turned out Respawn was working on Apex Legends, a battle royale game in the Titanfall universe but without the mechs – although there is a robot among the various Apex Legends characters. Boo. Still, Titanfall 2 is one of the best mech experiences out there, so we can’t complain. 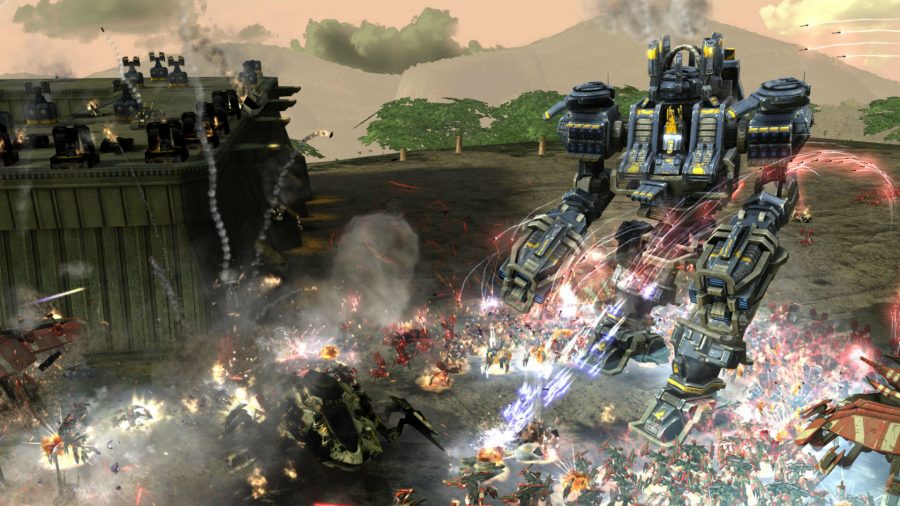 Yes, Supreme Commander 2 released nearly a decade ago now, but the bar for mech-based real-time strategy games continues to rest squarely in its metal hands. Everything about this robot game screams epic, from the enormous battles to the variety of units and structures at your disposal.

Supreme Commander 2 is not only a sequel to 2007’s Supreme Commander but also a spiritual successor to Total Annihilation from 1997. Given its lengthy legacy, it would have been easy for Supreme Commander 2 to rest on the laurels of its forebears. Luckily, all the iteration honed it into a tight and polished experience that continues to be the high point for the mech-based RTS. 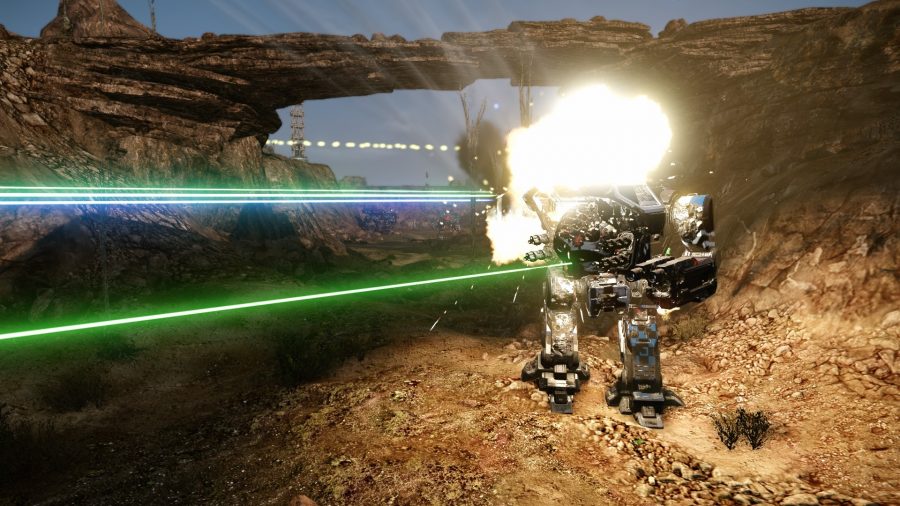 In the seventeen-year gap between the release of MechWarrior 4 in 2002 and this year’s MechWarrior 5, mech fans flocked to MechWarrior Online, a free-to-play game that takes the tactical challenge of brawling in big machines to the PvP realm.

It’s not an easy-to-approach game, and being free-to-play comes with its own slew of expectations to overcome, but there’s no denying the faithfulness to the tried and true MechWarrior gameplay. There’s a lot to keep track of, like your system’s heat levels and how far you can turn your mech’s torso – standard MechWarrior fare. For purists, playing exclusively online may not be the ideal MechWarrior experience, but since MechWarrior 5 is primarily single player, MechWarrior Online is the best way to fight your friends in the universe of BattleTech, or to sate your robo-urges while you wait for MechWarrior 5 on Steam. 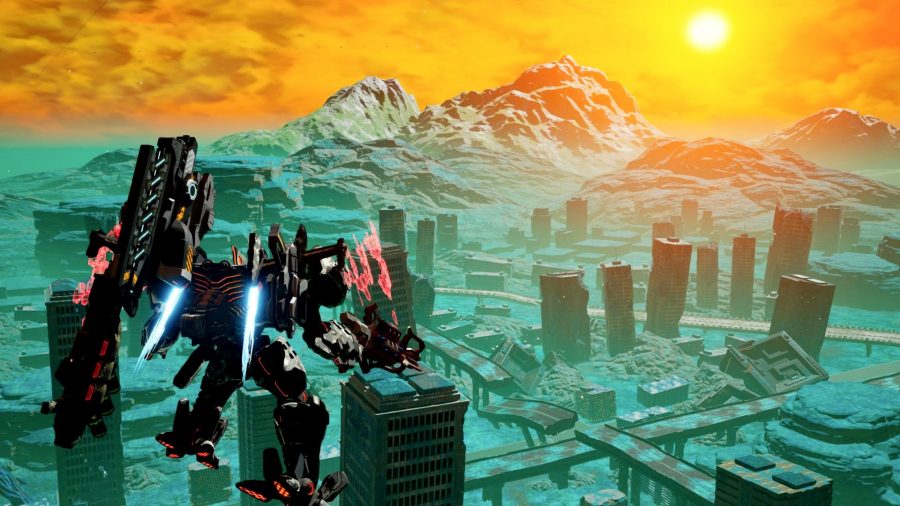 While its story is lacking and it’s arguably too easy for its own good, there’s no denying that Daemon X Machina was built from the ground up to appeal to mech games fans. The sheer amount of character and mech customisation options available means its possible to spec your ideal mech all the way from the pilot and paint scheme right down to the specific weapons systems you want.

You can admire your build while wandering around your base between missions, but it’s during the heat of battle where all that customisation really pays off. Daemon X Machina is perhaps the best feeling mech game in recent years, with a huge range of animations that ensure movement feels fluid as you cycle through attacks and transition between stomping around on terra firma and blasting through the air. 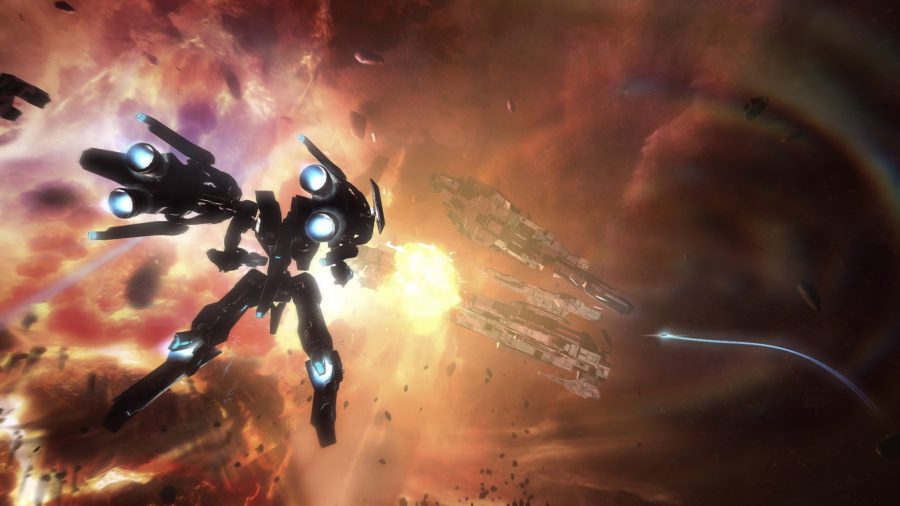 If MechWarrior is the slow-paced, deliberate mech experience, then 2013’s Strike Suit Zero is the exact opposite. What begins as a fairly standard spaceship dogfighter quickly turns into a Gundam-style action shooter thanks to the titular Strike Suit. It’s a spaceship/mech hybrid that’s able to transform and dish out a frightening variety of explosive power. Locking on to a wave of enemies and decimating them all in one go is rarely this satisfying.

Developed by Born Ready Games as an attempt to revive the space combat genre, Strike Suit Zero offers up high-intensity space game action akin to Freelancer and Freespace with a healthy dose of Gundam thrown in for good measure. Even now there’s not a lot like it on the market. Fans of mecha anime games and space combat would be doing themselves a disservice by skipping this robot game. 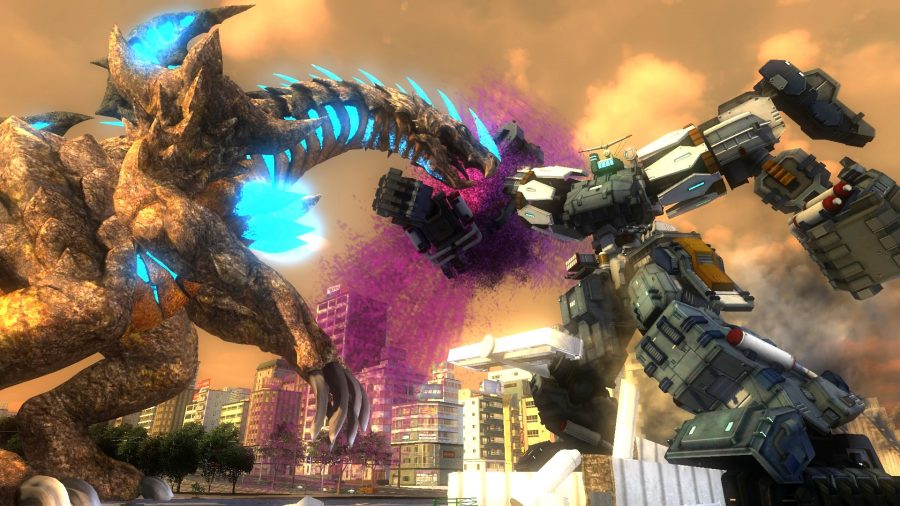 We may be stretching what qualifies as a mech game with this one, but it’s hard to resist the appeal of Walking Fortress Balam – a towering robot that stands taller than any skyscraper on the planet. Most of the game features quick on-foot shooter action against waves of insect-like enemies, but every once in a while more firepower is necessary. Enter the Air Raider and their ability to summon Balam. Primarily used to engage in battle against an enormous Godzilla-inspired monster named Erginus, piloting the Walking Fortress truly is a power trip like none other.

Released in 2016, Earth Defence Force 4.1 is actually a remaster of 2014’s Earth Defence Force 2025. Developer Sandlot made a number of improvements for the remaster, and even included a brand new expansion that added lots of new content to the base game, which is saying a lot considering it already included over 700 weapons. The Earth Defence Force series has gained something of a cult following in recent years, and the over-the-top Jaeger action of Walking Fortress Balam is a big reason why. 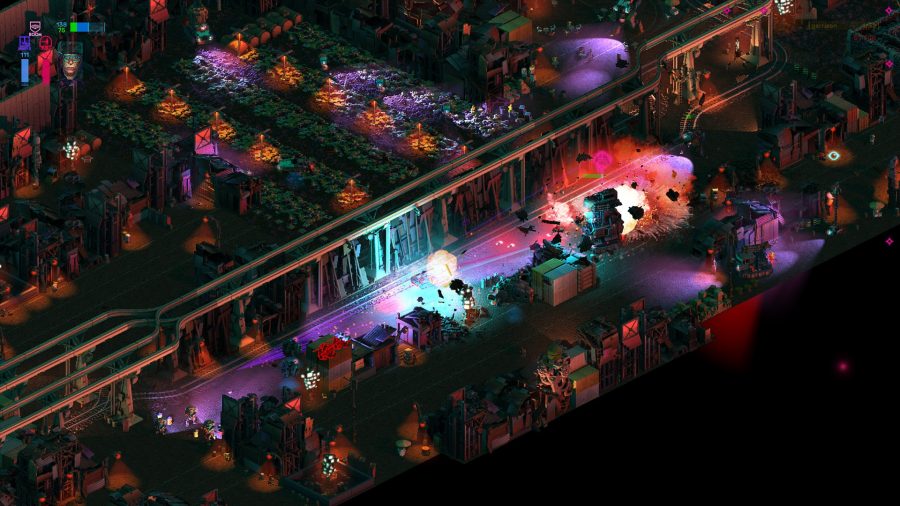 How do you fancy levelling an ‘80s cyberpunk-inspired city? In Brigador, you pilot a tank or a mech in twin-stick shooter-style and mow down waves of enemies, and any buildings that get caught up in the crossfire. It’s not all mindless destruction, however, as you need to be careful of civilians and prioritise targets, lest they sound the alarm for reinforcements. The visuals in this cyberpunk game are grainy and deliberately lo-fi, which perfectly emulates the neon-noir of the Blade Runners and Total Recalls of the world, and the synth-heavy soundtrack sets the mood just right.

There are some tactical elements at play as well. For instance, ammo is not infinite and certain terrain will slow your vehicle, meaning you need to pay special attention to your surroundings. Brigador also pedals in variety, with a host of weapon and vehicle combos that keep the game fresh, level after neon level. 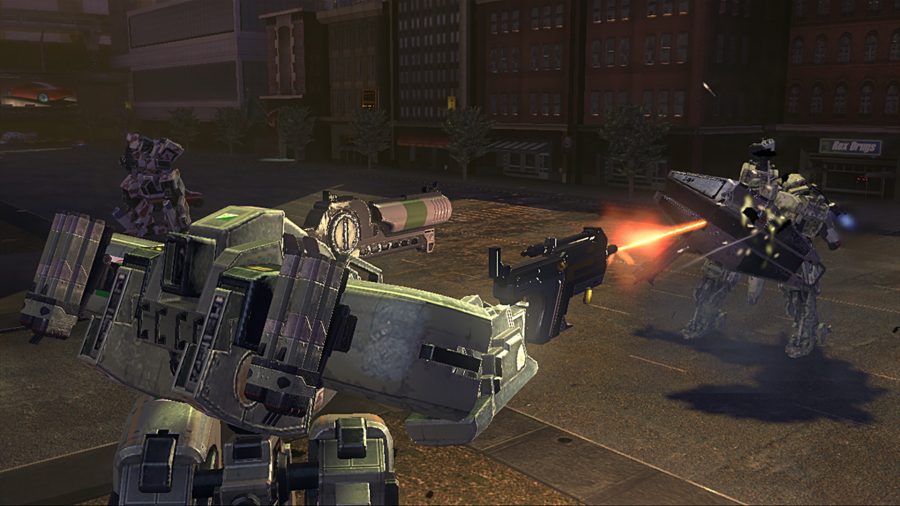 Released in 2010, Front Mission Evolved took the tactical turn-based formula of previous games in the series and turned it into an action-heavy third person shooter. Aside from a port of the 2005 PlayStation 2 game Front Mission Online, it’s also the only entry in the series to appear on PC, so that’s gotta be worth something.

At first glance, comparisons to MechWarrior might seem appropriate, but Front Mission Evolved is a much faster experience. Piloting a Wanzer, you dash, hover, and gun your way to victory in a series of missions, each filled with shooting galleries populated by enemy mechs. The story of Evolved served as a reboot for the series, meaning you don’t need to be familiar with the lore – which dates back to 1995 – to enjoy all the characters and plot twists. 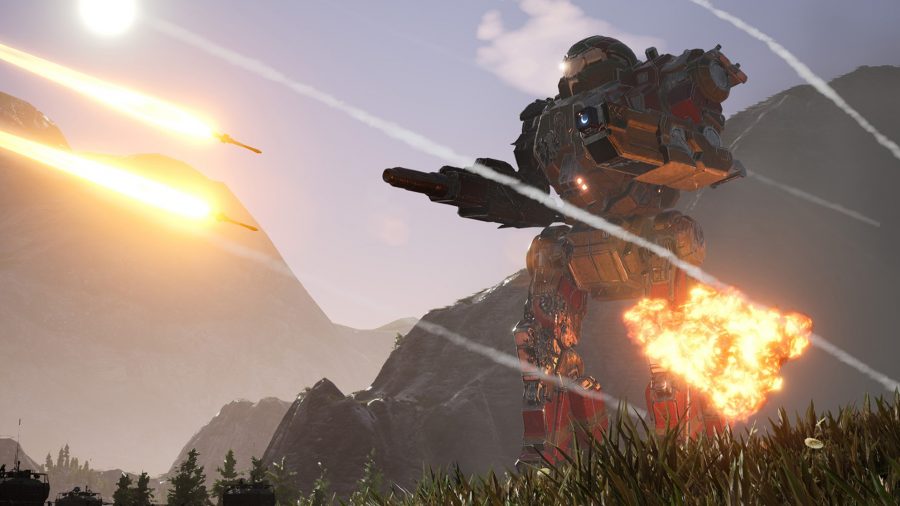 The latest installment in the robot game series, Mechwarrior, means strapping back into the mech suit for another round of smashing things up. MechWarrior 5 features plenty of the same chunky combat, letting you level entire cities with your mercenary mech army. This latest robot game weaves in a little more tactical gameplay for a slower pace, and a focus on building your forces strategically over the course of the main campaign.

There you go, the best robot games with which to cause maximum destruction. However, if you’ need some relief from all that action and fancy a quieter approach, the best stealth games on PC will calm the insidious tinnitus. And, of course, you can never go wrong with the best PC games available right now. But, if you’ll excuse us, we have some battle suits to polish.

Author’s Opinion regarding the Best Mech Games For PC

The Best Mech Games For PC has very strong features, while considering the security purpose, priority is very high. No VPN or RDP are required for the said purpose. In some cases, emulator also working fine and middleware software also have the important role for smooth functioning. Therefore, author recommended the Best Mech Games For PC for your personal use and has no issue regarding the installation on PC (Windows and Mac). I hope you also use it without any trouble, if you have any issue, please mentioned in the email, we will provide you answer with proper solutions. Please like and share with other, we did lot of efforts during the collections of the software for your download.