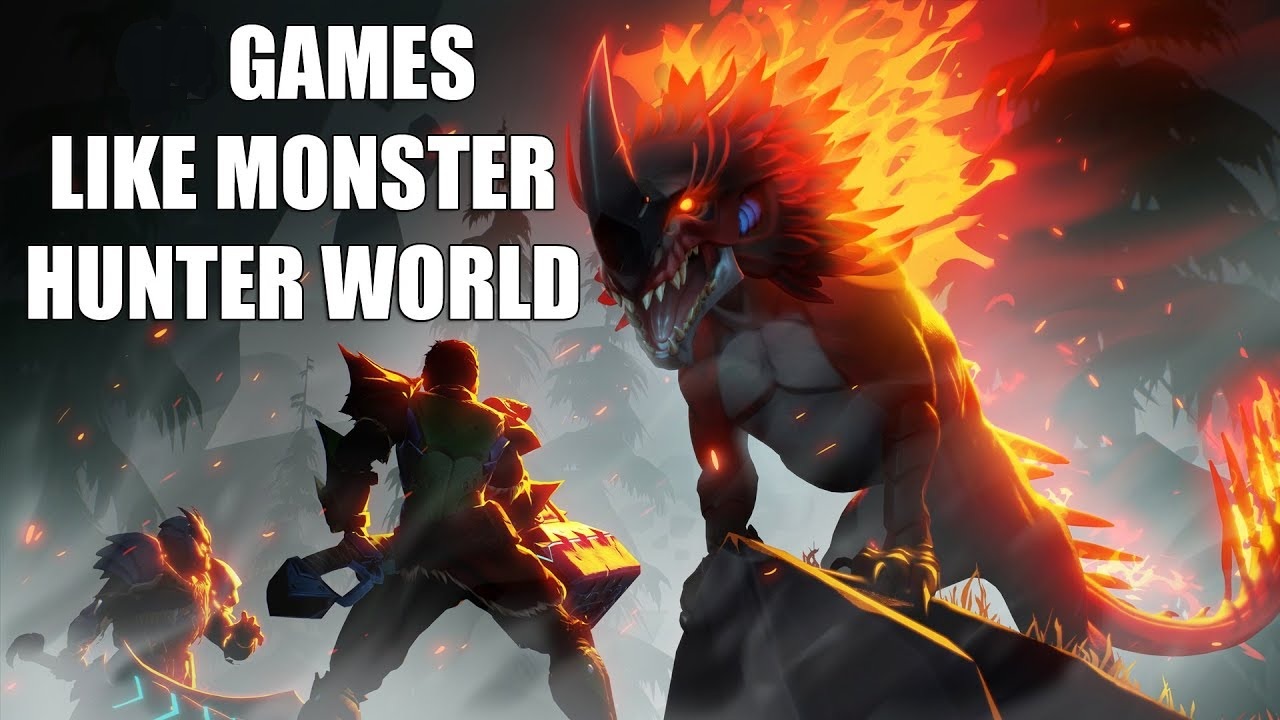 Best games like Monster Hunter: World you can play on PC 2022

What are the best PC games like Monster Hunter: World? We had to make our own fun for a while as Monster Hunter: World came to consoles first. Now that it is on PC, though, we can join in on the fun and indulge a power fantasy that includes launching an overgrown lizard into the air by swinging a hammer the size of an elephant’s hindquarters into its scaly gut.

The benefit of waiting, however, is that we’ve been able to clue ourselves up on some of the best PC games like Monster Hunter: World, too. Now if we want to play something a little bit different, the option is there.

Plenty follow the same beats that Capcom’s series lays out, such as a Jurassic theme and hunting monsters for amour. If that’s your scene, check out Dauntless. Some share the same incentive for loot, but change other elements. For Example, Destiny 2 is very much about the grind for better gear but is based in space. Anyway, enough of the chitter chatter, here are some of the best PC games like Monster Hunter: World. 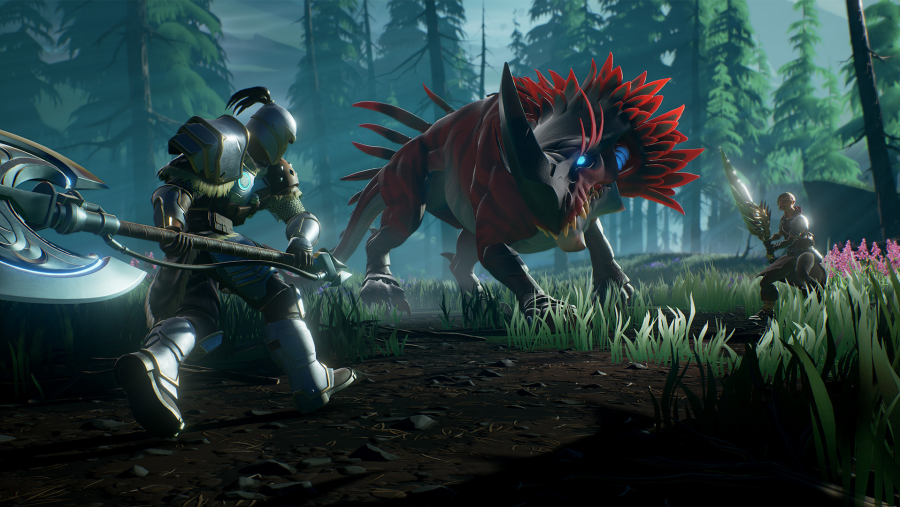 Dauntless takes the Monster Hunter experience and streamlines it by taking out the legwork between fights. That means you can visit the game’s bustling social arena, Ramsgate, in one moment and then be hunting a Dauntless Behemoth in the next moment.

All the usual loot-based incentive is still intact, too, and there’s plenty Dauntless Exotic weapons and armour to go after. If you’re unsure about taking on a massive game like Monster Hunter, then this is a handy alternative as it’s free-to-play. So you don’t have to worry about forking out for something you may not gel with. 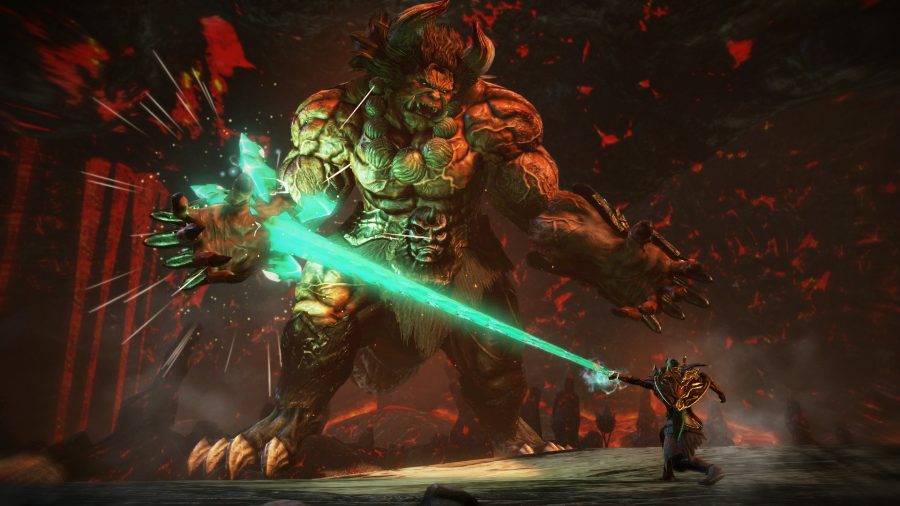 The idea in Toukiden 2 is to slay huge demons known as Oni in order to protect humanity from destruction. In short: take Monster Hunter and swap out the wyverns and dinosaurs for the horrors of Japanese medieval folklore and, hey presto, you have Toukiden.

There are so many similarities between Monster Hunter and Toukiden that, in distinguishing them, you may as well be trying to spot the difference between a Rathalos and a Rathian. Both involve hunting gigantic snotty beasts, both let you bring friends along for the slaughter, both let you upgrade your weapons and gear using resources from fallen enemies, and both originate on handheld consoles.

You could buy Toukiden: Kiwami, which is the enhanced version of the first game that was released on PC. But for a better experience you will want to try out Toukiden 2 as it was made with PC in mind from the start. It is also the only open-world game in the Toukiden series so far, which makes it the equivalent of Monster Hunter: World for its respective series. 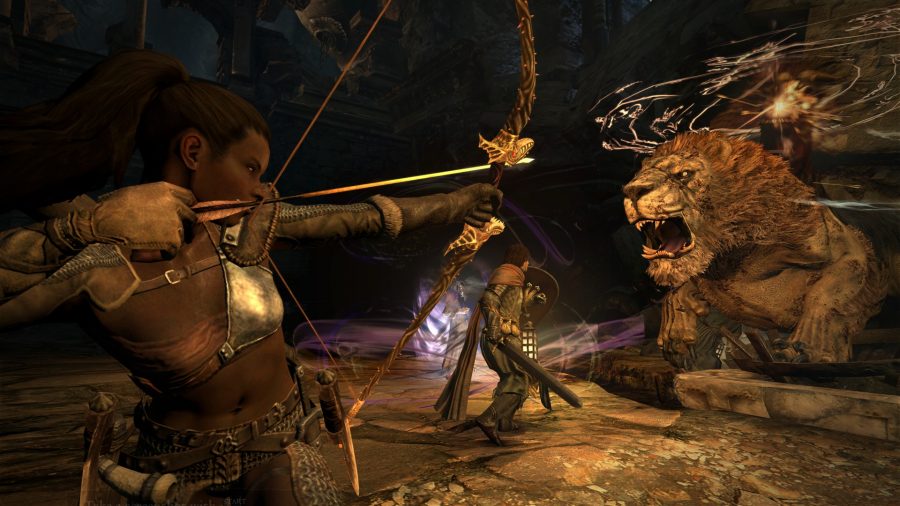 Capcom’s other creature-slaying PC RPG is Dragon’s Dogma. This is a game that starts with a dragon ripping your heart from your body. Just snatches it right out of your chest. What a git. Understandably, you are not particularly pleased about the situation, and set out to find that damn dragon to retrieve your absent vital organ.

That is not as easy as it… actually, it doesn’t sound easy at all, does it? You are going to need to get a lot of practice in before you – a bloodless dimwit, let’s not forget – are able to go toe-to-claw with a fire-breathing beast of legend. Weak as you are to begin with, it turns out you are the ‘chosen one’ and are capable of taking on hydra, griffins, and chimera with a little time and experience behind you.

Dragon’s Dogma ticks a lot of boxes if you are looking for an experience similar to Monster Hunter that you can play on PC: an open world, huge beasts to mount and stab in the face, a plethora of armour and gear upgrades, and a party of armed fools to lead around. Unfortunately, that party does not consist of other online players, but AI-controlled ‘Pawns’ that learn how to fight from you (poor things). Once you have trained them up, other players can borrow your Pawns for their own games. It is not a replacement for online co-op but, hey, even without that Dragon’s Dogma comes close enough. 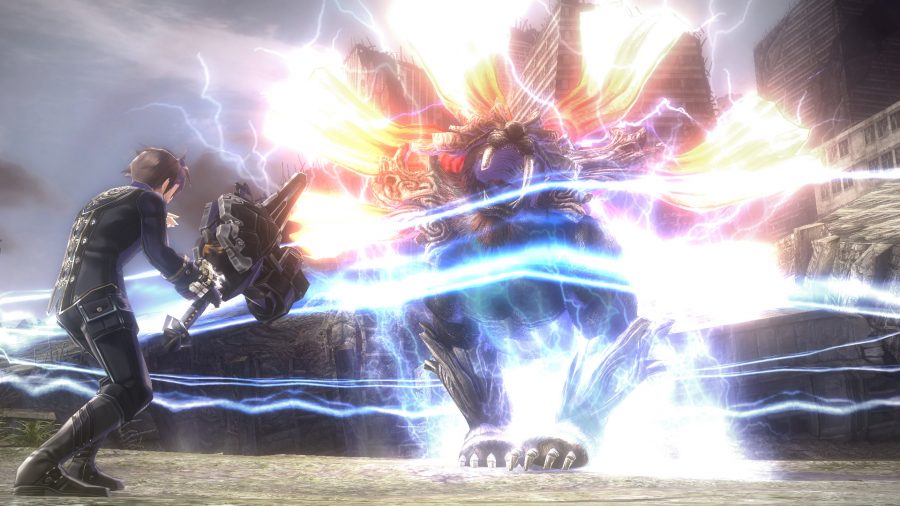 The weapons you use in God Eater 2 are one of its biggest draws. Called God Arcs, they are developed from the cells of the Aragami – the huge monsters you are sent out to defeat. This means you can collect materials from the dead bodies of your large opponents to upgrade your arsenal. In fact, God Eater lives up to its name by letting you actually devour the monstrous corpses you create. Nom nom.

While all the weapons in God Eater 2 seem to have been manufactured in the same factory as other anime games – they are huge, glow yellow, and cause a lot of blood to gush – they are as varied as Monster Hunter’s roster of blades, blunts, and ballistics. There is plenty of room to specialise here – you can charge into battle with a scythe dragging at your heels, stand back and take pop shots with a sniper rifle, or move in cautiously with a short blade to pierce enemies in fast flurries. Not only are there are a bunch of weapons to choose from that allow for different playstyles, they each have different forms you can transform them into – knowing when to deploy the right form can give you the upperhand in battle.

Another aspect of Monster Hunter: World that God Eater 2 nails is supplying you with hundreds of missions so you can farm for items and materials to upgrade your equipment. Some will find it repetitive, others will relish the chance to watch the numbers tick upwards as they get incrementally better at dishing out gobfuls of ultraviolence. 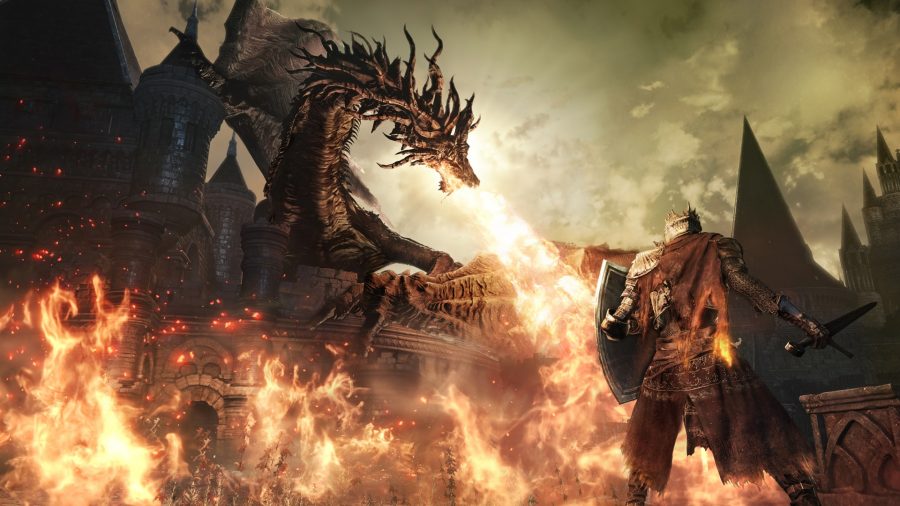 Look, despite some questionable assessments out there, Monster Hunter: World has little in common with Dark Souls III. But hear us out.

With dragon slaying, plunging attacks, and plenty of blunts and blades to specialise in, Dark Souls III is a decent alternative to Monster Hunter: World. The series is notorious for its challenging boss battles, after all. You can even cut the tails off some of the mighty lizards and turn them into weapons, just like in Monster Hunter.

Where Dark Souls III differs, however, is in its larger interest in worldbuilding, atmosphere, and storytelling. Rather than your progress being visualised as a carved-up hide worn as a piece of grotesque armour, Dark Souls III metes it out through the camp fires that you springboard from throughout each of its areas. There is a greater focus on learning how to conquer areas, not to mention an underlying interest in tying together convoluted plot threads between characters, locations, and item descriptions.

That said, you get the same sense of achievement when you return to an area with an upgraded blade and slice through enemies with the ease of chomping on a piece of cooked meat. You will still want to hunt for items, farm them before big battles, and acquire materials to upgrade your gear. One beast even has the head of a crocodile and the agility of a dog – squint, and you might mistake it for Monster Hunter: World’s dreaded Odogaron. 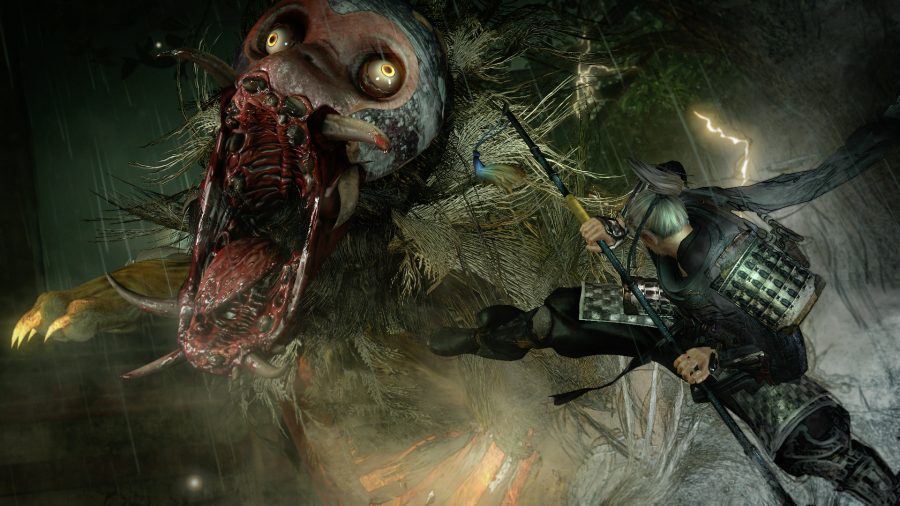 Imagine Dark Souls but with a rigid, mission-based structure, a lot more repetition, and plenty of ugly bosses to cut the flesh off. That is Nioh. If we were pushed, we’d say it is a game that sits somewhere on the spectrum between Dark Souls and Monster Hunter: World.

Nioh’s approach to bosses is not quite as wild as it could be. Whereas the Dark Souls series does well to mix up the horrors it throws you into an arena with, Nioh mostly sticks to giving you humanoid bosses to dance with, the variation often being their size and types of attack (the less said about the centipede boss the better). Still, these are boss fights that require plenty of preparation. You will need to hone both your samurai fighting style and your use of support items if you are to progress. Failing that, you can always bring in an online friend to outnumber your foe.

Where Nioh really taps into that Monster Hunter vein is in how much it gives you to do at all times. It throws missions at you as if it were a hunter trying to put a raging beast to sleep with a volley of tranq bombs. It gives you an absurd number of stats, skills, weapons, armour, stances, and god knows what else for you to manage inside and outside of missions. If you are into making the tiniest tweaks to your loadout, and prepping for battles like a proper hunter should, then you will be in heaven. 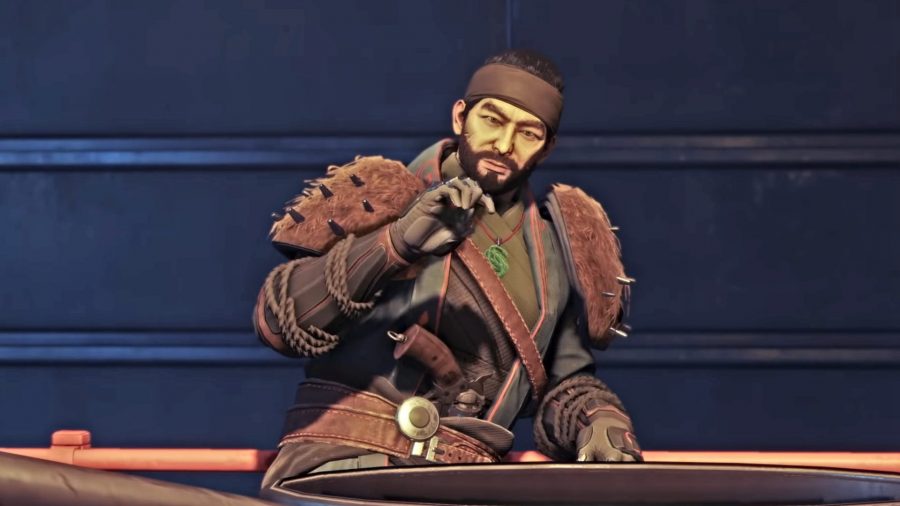 Bit of a curveball, this one, but Destiny 2 does have its fair share of similarities to Monster Hunter. Yes, of course, the sci-fi setting is worlds apart, and the first-person shooter format puts it in another category of game entirely. But Destiny 2 is a game with instance-based conflicts against some large-bodied aliens.

The MMORPG side of the game also runs parallel to the item management and stats upgrades of Monster Hunter: World. You will be running through the same areas, popping off headshots and grabbing loot left, right, and centre. Unfortunately, you cannot cut the skin and body parts of the fallen to repurpose as armour in Destiny 2 – a real shame, as we quite fancy sporting a metallic Vex outfit – but there is Glimmer to spend, Shards to install, and Destiny Exotics to infuse.

As you can see, Destiny 2 can compete with Monster Hunter: World when it comes to odd nouns, too. For every Ajanath, Malachite Ore, and Gajalaka that Monster Hunter has to offer, Destiny 2 retorts with Hunter Arcstriders, Telestos, and Xur. This, surely, is where the real conflict lies.

Games to look forward to: Destiny 2 Beta For PC

And there you have it, the best PC games like Monster Hunter: World. Plenty of games have taken on the challenge of striking a balance between satisfying but difficult creature fights. Others, meanwhile, have looked to perfect the loot-grinding loop. Either way, we hope there’s something here that takes your fancy, if not Monster Hunter: World, itself.

Author’s Opinion regarding the Monster Hunter Like Games For PC

The Monster Hunter Like Games For PC has very strong features, while considering the security purpose, priority is very high. No VPN or RDP are required for the said purpose. In some cases, emulator also working fine and middleware software also have the important role for smooth functioning. Therefore, author recommended the Monster Hunter Like Games For PC for your personal use and has no issue regarding the installation on PC (Windows and Mac). I hope you also use it without any trouble, if you have any issue, please mentioned in the email, we will provide you answer with proper solutions. Please like and share with other, we did lot of efforts during the collections of the software for your download.