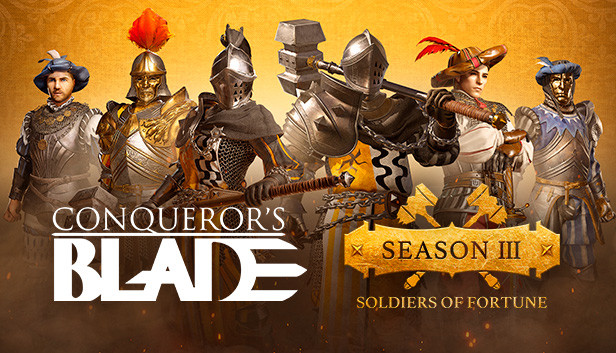 Medieval Games For PC; What are the best medieval games to play today? Medieval Times; affectionately looked upon by gamers as one of the most intriguing eras to base a game around. Guilds, castles, crusades and cathedrals dominate this era known as the Dark Ages.

There are plenty of games out there that delve into the captivating Middle Ages, but which ones are the best? Read on to find out the 20 best medieval games to play today.

Besiege castles and rule your faction!

Featuring a world torn apart by constant warfare, Mount & Blade: Warband is one of the few games that recreates the sensation of living in a medieval world. To survive you must assemble your own band of warriors and enter the chaos, expand your realm, and battle your way to the ultimate prize: the throne of Calradia.

The exciting sequel to Mount & Blade: Warband is set 200 years prior and expands the world of Calradia. Civil war can work to your advantage as you construct siege machinery, engage in diplomacy, craft and name your own weapons and experience the ebb and flow of a simulated feudal economy. The name of the game is power, and to get it you can bombard mountain holds with siege engines, establish criminal empires or take the old fashioned route and charge into battle for glory!

An open world MMORPG designed to emphasize realism. Gloria Victis gives players the opportunity to be part of a living society. Action-based, non-target combat means your skills and tactics actually matter, whether you choose to become a soldier, archer, assassin, huntsman, blacksmith or any number of selections. Gloria Victis challenges the player to conquer land, siege castles and build fortifications to gain and keep territory control.

A peaceful life is shattered when Henry, the son of a blacksmith, witnesses a mercenary raid on his own village and is helpless as his friends and family are slaughtered. Barely escaping with your life, you join Lord Radzig Kobyla, who forms a resistance against the invaders. Build your character’s skills, earn perks, and forge your own equipment in a stunning replica of medieval Bohemia.

The main objective of Kingdoms and Castles is to build your city and survive Viking raiders or the occasional dragon. You start with a small hamlet and have nearly limitless ways to build your kingdom and castle. To survive and thrive you must strategically create a town that can protect itself against attack, but also a town that attracts new residents; after all, taxes can’t pay for your castle if there are no people to tax!

Kingdom Classic is a 2D side-scrolling strategy game that puts you, a monarch, astride a horse that can only travel left or right across your kingdom. The idea is to spend your coin wisely to buy resources and peasant loyalty that will help your kingdom flourish and help you survive attacks on your kingdom during the night. Mysterious forests are also accessible and hold artifacts to aid your kingdom.

Avoid the swarms and the dark disease they carry

The year is 1349. Your enemy is a swarm of rats bearing a devastating disease that has ravaged the Kingdom of France. If that weren’t enough, the inquisition is on the hunt for you as well. You play Amicia, a 15 year old girl on the run with her little brother, Hugo. To survive you must join forces with other children, create fire and light to keep the swarms at bay, and work together to combat one of the darkest hours of history.

Stronghold HD includes 21 missions to test your skills against four renegade lords set in medieval England. To complete the missions and overthrow the traitorous lords you must gather resources, build weapons, and design a castle with a working economy that will buffer your strategy for victory. Some missions come with a time limit that must be adhered to, such as tasking players to gather resources and build weapons.

Lead your mercenaries to victory!

Battle Brothers puts you front and center in a band of mercenaries. You get to decide where to go, what contracts are worth fighting for, whom to hire to fight with and how to train and equip your men. To succeed you must travel the world map and take contracts that earn you coin, find enemies worth pursuing and places worth looting. Crusader Kings II is all about keeping your dynasty alive and thriving. You choose a Christian lord for your character anywhere between the year 1066 and 1337. Keep in mind the historical accuracies of the year you choose to start, as some lords will face more difficult tasks depending on when you start. This game takes place over centuries as you play a succession of descendants through the ages. You must keep your feudal domain from falling apart by unravelling the plots of your vassals, fighting heathens and heretics and defending against the Mongol Horde.

Off with his head!

In the world of Abella the goal is to survive and flourish in an unforgiving medieval world. You must use a wide range of strategy and survival skills complemented by a thriving economy, community building, diplomacy and warfare to succeed. Use non-target PVP and massive sieges to gain loot, weapons and experience. 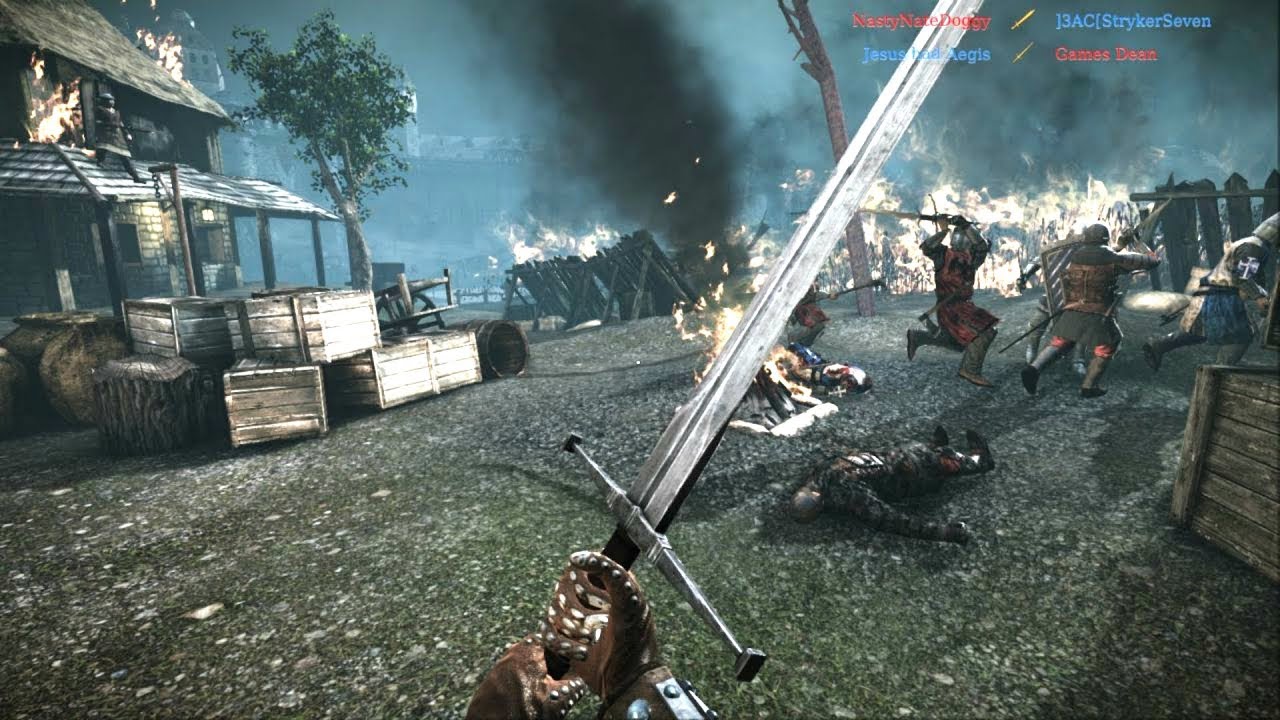 As if you weren’t already afraid of small spiders…

In the huge open-world MMORPG that is Mortal Online, you must survive by building your skills. You can choose to focus on PvP or PvE, both of which share the same world. Choose a profession that will keep you alive whether it is combat, crafting, magic, trading or a number of other available careers. You can choose to go solo or join/create a guild with friends to build a keep or even an entire city. Looting capabilities means there’s a chance you will lose all your items when you die, so survival is key! 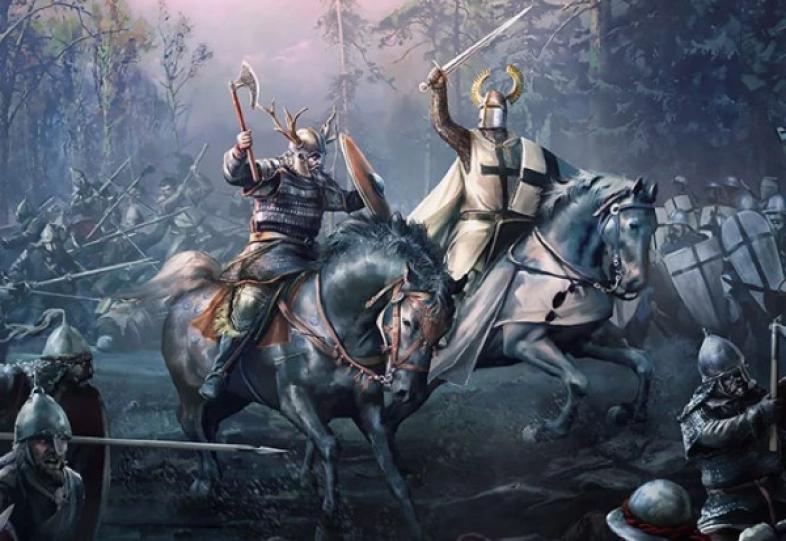 The sweet and satisfying taste of revenge is the goal in Sekiro: Shadows Die Twice. You must combine stealth, vertical traversal, and head to head combat to succeed in rescuing the young lord you were bound to protect. Using powerful ninja capabilities and the use of deadly prosthetic tools, you face foes in a dark and twisted world set in the late 1500s Sengoku Japan.

Take on skeletons and other dark creatures

In Dark Souls 3 your goal is to return the five Lords of Cinder to their thrones at Firelink Shrine in order to link the flame again. As an Unkindled, you will face colossal enemies in the world of Lothric and must use a variety of weapons, items, and magic to succeed in battle. A new combat system gives you additional weapon-specific skills that deliver powerful special attacks and provide power-ups.

Learn the lore behind the monsters you hunt, and use it to your advantage to find their weaknesses

Playing the Witcher Geralt, your ultimate goal is to find Ciri, the Child of Prophecy that can alter the shape of the world. During your quest you’ll have to earn coin by hunting monsters, winning horse races, and playing card games. Use an arsenal of upgradeable weapons and armor, as well as combat magic, to survive exotic monsters and collect your pay before moving onto the next town, pirate island, mountain pass, or wherever the next contract takes you.

The fifth installment in the Elder Scrolls Series puts you in the role of the Dragonborn, a mortal born with the soul and power of a dragon. Your goal is to defeat Alduin the World-Eater, a dragon prophesized to destroy the world. To do this you’ll have to carefully build your characters skills in a variety of different genres such as Smithing, one- and two-handed combat, sneak, archery, destruction magic, conjuration, and many others. Learning dragon shouts will help you in your questline, as will completing side quests to earn coin to buy materials and upgrade your weapons and armor.

Build your character bigger than life

In Conan Exiles you start as a lowly peasant rescued by Conan himself, and must build your way up to a ferocious barbarian. The goal of this online multiplayer game is to survive. To do this you’ll have to endure freezing temperatures and sand storms, hunt animals for food and resources, and build your domain piece by piece. Use swords, bows, siege weapons and even avatars of the gods to defeat your enemies and reclaim the Exiled Lands.

Immerse yourself in a fascinating and gritty medieval world

The objective of Chivalry: Medieval Warfare is to besiege castles, raid medieval villages and fight for glory in the arena. An online first-person slasher game, you must use weapons from a choice of up to 60 weaponries ranging from battle axes and maces to swords and longbows in order to defeat enemies in battle. Siege weapons are also available to batter down your enemy’s gates and castles.

Choose your faction and fight. For honor!

For Honor lets you choose between three of the fiercest warrior factions; knight, Viking, or samurai, all dependent on your playing style. Once you choose, the object is to join the war and fight for your faction’s honor. During battle you will switch between three weapon stances to cut around your opponent while parrying their attacks. Gain rewards using the new training modes to go from Apprentice to Master, and take your new skills into battle. For honor!

The object of Mordhau is to fight. Use combinations from a huge arsenal of weapons and equipment to take on enemies and cut them down in this medieval first & third person multiplayer game. As a mercenary, your quest is to engage in battles ranging from small skirmishes to 64-player all-out war and to achieve victory in those battles.

Author’s Opinion regarding the Medieval Games For PC

The Medieval Games For PC has very strong features, while considering the security purpose, priority is very high. No VPN or RDP are required for the said purpose. In some cases, emulator also working fine and middleware software also have the important role for smooth functioning. Therefore, author recommended the Medieval Games For PC for your personal use and has no issue regarding the installation on PC (Windows and Mac). I hope you also use it without any trouble, if you have any issue, please mentioned in the email, we will provide you answer with proper solutions. Please like and share with other, we did lot of efforts during the collections of the software for your download.