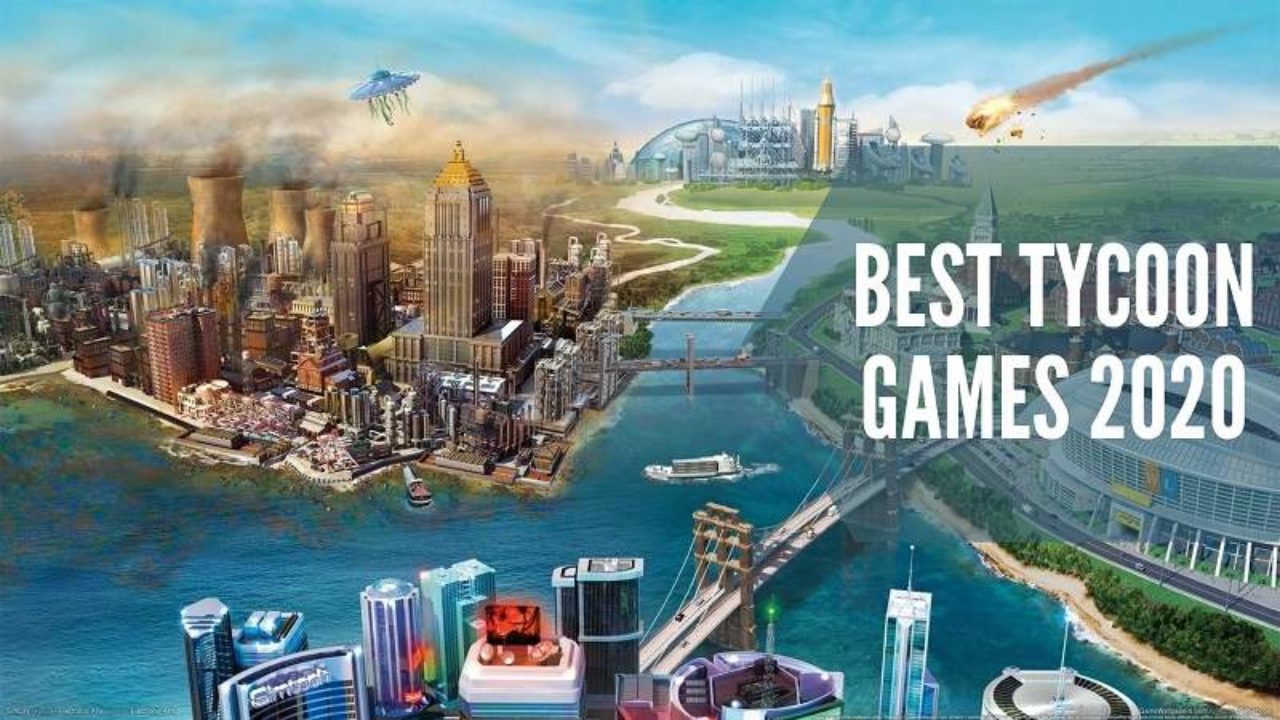 Have you ever wanted to be a captain of industry? You know – one of those great business leaders with sprawling empires, worldwide fame, and unimaginable fortune? If so, the best tycoon games of 2023 are calling your name!

The best tycoon games let you experience the thrills and excitements of entrepreneurship, but without the risk. You can build your own business from scratch and strategize your way to major market share. Plus, there are tons of great tycoon games on the market, with industries ranging from theme parks to the restaurant biz.

This article takes you through the top tycoon games available. We’ll also peek at the best upcoming titles and get a feel for the mechanics behind the genre. Think you’ve got what it takes to corner the market? Let’s get down to business.

We’ve curated the following list of the best tycoon titles to help you get your business off the ground.

Our pick for one of the best tycoon games PC

Planet Coaster is an excellent PC tycoon game that offers the perfect blend of construction and management mechanics. Start the game with an empty lot, and use your initial funds to begin building. Invest wisely as you develop scenery, roller coasters, and other exciting activities. With enough effort and a little luck, you can build a hit park that rivals Disneyland itself. Think you’ve got the business chops to succeed? Be sure to check out Planet Coaster on Steam and ride your way to victory.

Our pick for one of the best theme park tycoon games

If you’re seeking an exciting theme park game, Parkitect is a great choice. You get to build exciting rides, acquire new customers, and rake in the cash– as long as you spend wisely. You’ll have to take charge of the entire business development cycle, from financial oversight to employee management. The game features unique mechanics that separate it from the pack, and it’s quickly garnered a huge community of modders. Moreover, it boasts some of the highest ratings in the genre!

Our pick for one of the best tycoon games Android

Have you always wanted to own your own game studio? Well, Game Dev Tycoon can make that a reality. Players begin the game in the early 1980’s with nothing but a dream and a garage to work out of. From these humble beginnings, players are tasked with developing innovative titles, assembling a team of master game makers, and navigating the winding maze that is the game industry. Interested? The game is a ton of fun, and it’s by far the best sim game for mobile!

Our pick for one of the best tycoon simulator games

If you’re looking for something a bit different, Two Point Hospital may be the best tycoon game for you. You’re in the hospital management business, and it’s up to you to turn this dilapidated medical center into an industry juggernaut. Build new expansions, hire an expert staff of medical professionals, and keep your patients happy and healthy. Two Point Hospital is a great way to get your tycoon fix and it offers endless hours of immersive play.

Our pick for one of the best tycoon games console

You know the story. Dinosaurs go extinct. Mad scientist resurrects them. Mayhem ensues. Jurassic World takes the thrilling franchise and hands the reins over to you. That’s right– it’s time to build your own jurassic park. Create the park layout, breed the dinos, and open your gates to the public! After that, it’s just a matter of regular maintenance and raking in the cash. I mean, what else could go wrong?

Our pick for one of the best Tycoon games iOS

Prison Architect is a unique tycoon game that has players assume control of a prison developer. You’re responsible for overseeing the entire operation, from layout, to staff hiring, to maintenance and more. But it’s much easier said than done. As the prison fills up, it’s up to you to keep the inmates happy and safe. All you’ve got to do is keep everyone in line and you’ll be just fine…

Our pick for one of the best railroad tycoon games

If you’re a fan of railroad tycoon games, Transport Fever is the way to go. Start the game in the year 1850 at the precipice of steam power. From there, construct your transportation empire filled with railways, harbors, airports, and more. The randomly generated terrains and unique missions provide new and exciting playthroughs every time. Plus, the game features a full-fledged campaign mode as well as a giant sandbox environment for unlimited business opportunities!

Our pick for one of the best tycoon games on Steam

Megaquarium has you assume the role of a newbie business owner whose set on creating an aquatic empire. Start your small aquarium with just a handful of old tanks and a few fishy friends. Spend your time designing exhibits, researching new technology, and managing your happy pets and visitors. It’ll be tough, but the world is truly your oyster. You can check out Megaquarium on Steam today!

Our pick for one of the top tycoon games PC

It’s common knowledge that there’s a lot of money in pharmaceuticals, and Big Pharma is here to change the game. Your mission is to assume the role of a manager at a startup drug company. Using your creativity, you’ll need to develop and manufacture new prescription drugs from scratch. You’re charged with sourcing raw materials, assembling a crew of rockstar employees, manufacturing all the drugs, and shipping them out to consumers worldwide.

Our pick for one of the best tycoon games ever

Capitalism Lab is the latest addition to Enlight’s hit Capitalism series. The premise? Create and manage a business empire from start to finish.The catch? You’re in charge of everything. Innovation, design, purchasing, manufacturing, shipping, and more– it’s all yours to handle. Go from newbie entrepreneur to business magnate in control of a massive global company. Capitalism is widely regarded as one of the best tycoon games ever, and this is one you don’t want to miss.

It’s the era of the steam engine, and you’ve got your heart set on claiming a piece of the action. Venture forth and build your own rail line to connect the cities of North America. Compete against rival corporations as you vye for control over the United State’s transportation sector. Finally, take your rightful position as railroad tycoon as you develop a business the likes of which the world has never seen before. Think you’ve got what it takes? Railroad Corporation is slated for a Summer 2019 release on Steam.

Are you a fan of fantasy games? Maybe you enjoy a good drink at the pub yourself every now and again? Either way, Crossroads Inn is an exciting tycoon game that’s sure to satisfy your taste buds, er, inner entrepreneur. Your task is to build and manage your own tavern in the world of Delcrys, a high fantasy realm. Be sure that every guest leaves with high spirits and a full belly, and watch as your reputation spreads throughout the kingdom. Intrigued? The game is set for release in latter 2019.

If you’re a fan of cool tycoon games that offer innovative mechanics, Voxel Tycoon is the way to go. Build your own mining factories, harvest resources, and create a sprawling transportation empire. The game boasts fun and playful graphics, but don’t let them fool you. It’ll take all your business acumen and a sound strategy if you’re to corner any of the market. The release date is TBA, but rest assured that the developers are hard at work putting the finishing touches on the game.

What are Tycoon Games?

Free Tycoon Games For PC aka economic simulation games, are video games that emphasize business development and economic management. Their objective? Build a business from scratch and grow it into a large and profitable enterprise. This typically involves developing a business plan, constructing the physical environment, micromanaging the development process, and growing the fledgling business into an empire.

Tycoon games often mimic real-life ventures with titles that feature a wide range of industries. To that end, the first tycoon games to hit the market back in the 1980’s included Lemonade Stand, Corn Cropper, and Oil Barons. As time went on and the genre matured, popular mainstream games like Railroad Tycoon and Theme Park were released to critical acclaim. Tycoon games peaked in the late 90’s and early 2000’s with megahits like Capitalism, but modern titles continue to innovate and push the limits of the genre.

Now that we’ve defined the genre, let’s look deeper at the nuances and mechanics that make tycoon games so great.

When you think of tycoon games, our guess it that theme parks jump to mind. This is thanks to exciting titles like Theme Park and Rollercoaster Tycoon. Their premise? Build your own theme park and exciting rides from scratch!

2. They can have real-world applications

Due to their real-world resemblance and AI integration, business simulations are sometimes used for training and predictive purposes across a variety of industries.

Released in 1963, Intopia is the first tycoon video game ever. It was so groundbreaking and innovative that modern day classrooms still use versions of the software to teach students about business management and strategy.

4. Capitalism is one of the best tycoon games ever.

Capitalism is regarded as one of the best tycoon games ever made thanks to its encompassing approach that features mechanics from the entire economFree Tycoon Games For PC aka economic simulation games, are video games that emphasize business development and economic management. Their objectiveic supply chain.

5. Tycoon games are a subgenre of simulation games.

That’s because they feature many of the same building and management mechanics as the best simulation games. The main difference? Tycoon games are narrower in scope and are strictly related to business management.

While tycoon games are great, you should never put all your eggs in one basket. For that reason, we’ve written a bunch of other great roundups for your gaming pleasure.

Author’s Opinion regarding the Tycoon Games For PC

The Tycoon Games For PC has very strong features, while considering the security purpose, priority is very high. No VPN or RDP are required for the said purpose. In some cases, emulator also working fine and middleware software also have the important role for smooth functioning. Therefore, author recommended the Tycoon Games For PC for your personal use and has no issue regarding the installation on PC (Windows and Mac). I hope you also use it without any trouble, if you have any issue, please mentioned in the email, we will provide you answer with proper solutions. Please like and share with other, we did lot of efforts during the collections of the software for your download.