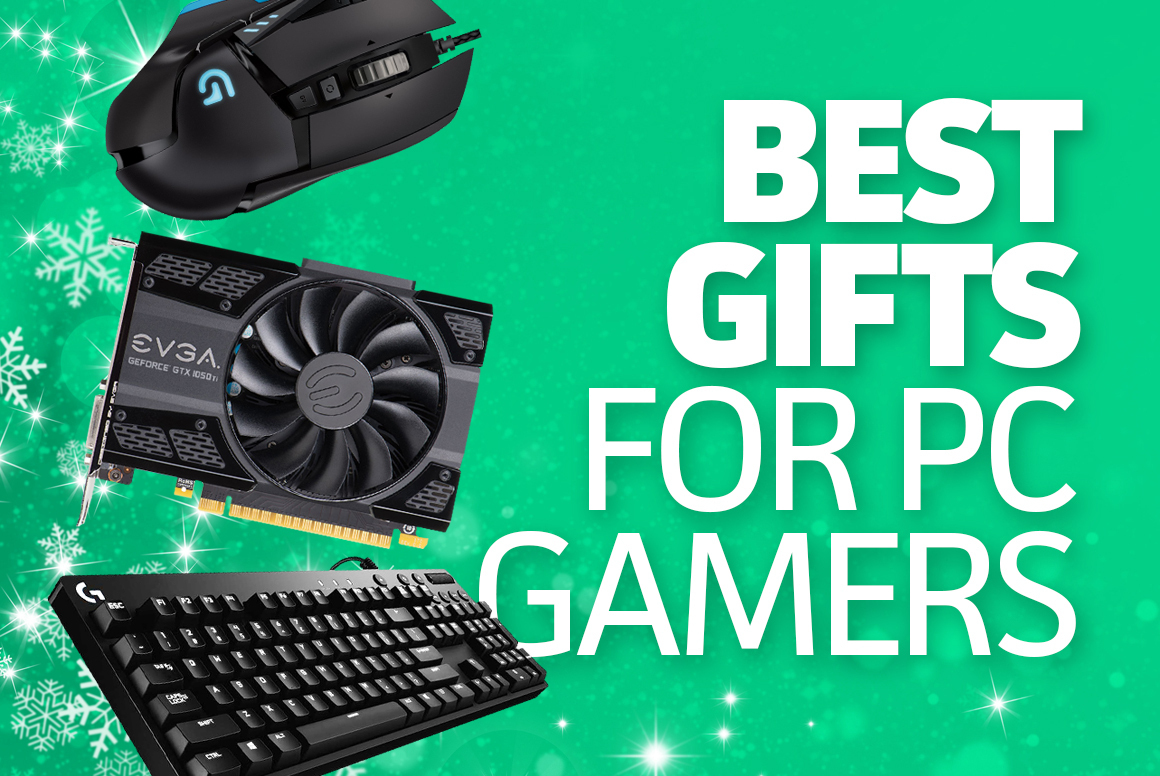 Best Gifts For PC Gamers With the big day on the way (no, not Take it in the Ear Day on December 8th), you might be getting your way through your Christmas shopping quite handily. Or, if you’re a normal human being: completely struggling to find something for so many different people. Luckily, if you know anyone of the geekier persuasion then there’s no shortage of gifts for gamers you can check out.

We’ve compiled a broad range of gifts for the controller-bashers in your life, ranging from the games themselves to gaming merch and even some cardboard — don’t worry, it makes sense. If you’re scratching your head for gift ideas, at least one of the choices below for gifts for gamers is sure to make a great Christmas present.

There was sadly no room to include Ride To Hell: Retribution.

Humble Monthly is a great way to get a huge wedge of new PC games and old at a low price. The headlining games are typically newer and announced ahead of time, but you can always find some quality when the rest of the bundle is fully released. If you know someone with an addiction for filling out their Steam library, this might just be the perfect option.

The biggest game of 2018 is no doubt going to be on many gamers’ wishlists this Christmas. Featuring a gigantic map of the Old West to explore and a level of detail and customisation rarely seen in a video game, Red Dead Redemption 2 is as much something you live inside of as it is an outright game. If you want to keep someone busy for weeks, Red Dead Redemption 2 is more than worth it.

You have no shortage of options if you want gaming t-shirts, but they can often be a mixed bag. The guys at Insert Clothing always deliver the goods with designs that feel more like classy homages than tacky branding and cover some of the biggest franchises in all of gaming. Ideal for anyone who has serious love for games and wants to show it off in style.

If you know someone with a PlayStation 4, a PlayStation VR headset is one of the best peripherals to go with it. Virtual reality looks great on the PS4 and has arguably the best selection of experiences of any platform. It’s also the cheapest and best-supported option to boot.

Displate are well-known for creating posters unlike any others out there. A quick browse through their gaming range will show you exactly why: not only are they made of the best metallic materials to make them stand the test of time, but they also feature designs that you won’t be able to find anywhere else. Their catalogue is pretty varied and huge, so dive on in.

Some people spend a lot of money on a gaming mouse when they really don’t need to. Logitech are known for producing quality PC accessories at affordable prices and the G502 is probably their most beloved after being adopted by streamers and professionals alike. Featuring high customisability and a supremely satisfying grip, the G502 is a better mouse than many other options many more times more expensive.

By no means a cheap gift, the Turtle Beach Elite Pro 2 is the premier in gaming headsets for a console gamer. With unmatched audio, comfort, and options to play with, its price tag is warranted as well as the fact that it’s been designed with pros, for pros. Maybe don’t let any children and their sticky fingers near it though, eh?

The most-anticipated mini-console of last year may not have had the twenty games most people would have picked as their PS essentials, but the PlayStation Classic could still have plenty to appeal to the PlayStation fans in your life. This little piece of emulated history comes with two controllers and can connect to any modern television no sweat. Now all you need is a bunch of FILA, Pot Noodles, and a long session of Tekken to really replicate the olden days. It’s really cheap these days, too.

One of the mini-consoles that really kickstarted the trend, the Super NES (or SNES) Classic is one that’s going to be a good fit in the home of any Nintendo fan. Featuring some of the greatest games of all-time and some charming throwback multiplayer fun, the Super NES Classic almost always goes out of stock as soon as it’s available so get ordering soon.

Continuing the Nintendo trend, this Cappy hat is going to make a great gift for any gamers who loved Mario’s most recent adventure, Super Mario Odyssey. Based on the sidekick that can possess other beings, this piece of merch unfortunately will not have the same effect in real life but will no doubt be appreciated all the same. You could probably even store a Switch in it.

This will probably be better received by the Fallout fan in your life than the new game in the franchise that just released. The Vault Boy is the series’ mascot and this Bobblehead is a replicate from the game itself in which they are collectibles. It’s a neat little gift idea but one that will still no doubt be appreciated by those who want to be watched over while they wander the wasteland.

Now here’s a gift for gamers we can’t believe isn’t on Christmas wishlist each and every year: a replica of the ocarina seen in the iconic The Legend of Zelda: Ocarina of time. While you may not be able to get the absolutely best sound quality when used as instrument because of the price, the song book will have you travelling back in time before you know what’s happening.

Know an Xbox One gamer and want to save them a whole heap of money? Then you should probably check out getting them a Game Pass subscription, which will give them access to all of the platform’s new console exclusive games as well as a constantly growing library of third-party titles. It’s difficult to ascertain just how much money you may potentially save, but it’s a lot.

Only Nintendo could sell cardboard to gamers and get away with it. Labo for the Switch is far more than it seems, however, offering new ways to play games by changing the shapes of the cardboard for things like motorbikes, pianos, and more. It’s a great gift for a younger gamer, allowing them to unleash their creative side and have fun at the same time.

You thought Nintendo were done being weird with their cardboard creation? Think again. Ring Fit is the Switch’s newest oddity, it acting as a exercise tool in the shape of a giant ring that you can use to make your character run around and burn some calories while doing so. Maybe make sure your recipient isn’t self-conscious about their weight before getting them this.

Pokémon’s back, and this time in their first full-fat 3D RPG for a home console. Sword and Shield take the action to the Galar region, which has been inspired by the United Kingdom. Catch 400 Pokémon in this charming adventure and take the battles online with friends; whichever version you pick is down to personal preference. Shield gang, though. Shield gang.

The PS4 Pro is the mid-term upgrade to the PlayStation 4 that allows improved framerates and better resolutions with the help of a 4K TV. If your gift recipient has the right TV, a PS4 Pro can breathe a lot more life into their games. There are a tonne of bundles out there for the PS4 Pro that usually translate into some savings, so be sure to search around.

If you know someone who plays a lot of Fortnite and therefore throws their DualShock 4 a lot in anger, this bundle might be for them. Not only is the controller itself cheaper than on its own, but they also get an exclusive skin and some V-Bucks to put towards cosmetic purchases in-game. One of the best Fortnite gifts for the obsessed dabbers in your life.

The biggest new FPS of 2019 represents a return to the roots of Call of Duty, Modern Warfare being a re-imagining of the original that the franchise made its name on. The action is chaotic, the modes and content will keep players busy for hours, and the single-player campaign makes a triumphant return. Just warn whoever gets this as a Christmas gift about the claymores.

Author’s Opinion regarding the Best Gifts For PC Gamers

The Best Gifts For PC Gamers has very strong features, while considering the security purpose, priority is very high. No VPN or RDP are required for the said purpose. In some cases, emulator also working fine and middleware software also have the important role for smooth functioning. Therefore, author recommended the Best Gifts For PC Gamers for your personal use and has no issue regarding the installation on PC (Windows and Mac). I hope you also use it without any trouble, if you have any issue, please mentioned in the email, we will provide you answer with proper solutions. Please like and share with other, we did lot of efforts during the collections of the software for your download.